Linkedin
101-Year-Old Man Accepted Jesus Christ As His Lord And Saviour After 24 Years Of His Wife’s Prayer!

101-Year-Old Man Accepted Jesus Christ As His Lord And Saviour After 24 Years Of His Wife’s Prayer!

101-Year-old George Warshaw lives with his wife, Lou Warshaw, in Louisiana, USA. Lou Warshaw prayed for twenty-four years for her husband that he would accept Jesus Christ as his Lord and Savior. All these years George refused to do that. Over time Lou had less and less hope that this moment would come. 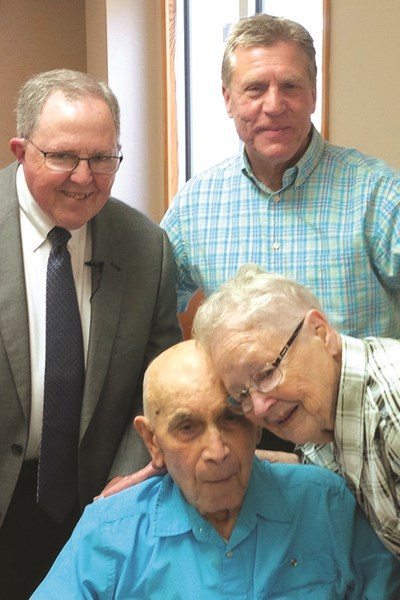 “The devil kept telling me it wouldn’t happen, Lou said, But I kept believing God would let it happen”.

Lou and George got married on July 24th, 1991. Lou was a Baptist, George was non-believing Jew. Lack of faith in God did not prevent George from attending with his wife the service at the Baptist church in Alexandria, Louisiana, every Sunday. He was always next to Lou during worship, and also he was taking part in the Bible study. However everyone knew that George was an unbeliever. The church members prayed for him, showed him their Christian love, but they did not pushed to the salvation prayer.

Over the years George’s health had deteriorated and in the last few months he was not able to attend church. The elderly man was forced to leave the house where he lived with his wife and go to Veterans Affairs Nursing Home in a nearby town.

George continued to communicate with believers, he often asked them a question concerning Christian faith. On July 10 George asked the church’s pastor, David Boothe, to visit him.

During this meeting George has prayed accepting Jesus Christ as his Lord and Saviour! Three weeks later George was baptized.

Pastor said that Lou is a perfect example of a Christian who continues to hope in the Lord, even when the situation seems hopeless.

Now Lou reads the Bible aloud to her husband!

“He can’t see well anymore, so I read him the Bible for a long time… I really didn’t know he would love to hear the Bible as much as he does. It’s like he has a hunger for it”, – said Lou.

The Act Of This Fisherman Deserves Respect! He Showed The World What It Means To Sacrifice For Others!
This Veterinarian Spreads The Word Of God In Nepal And Leads Entire Villages The Lord!